The main goal of this individual student project was to design and prototype a slice of fun and intense gameplay in a top-down, twin-stick-shooter, sci-fi boss encounter.

The primary mechanic which the gameplay is centered around is the player's ability to use a shield which fills a dual purpose:

This mechanic was in part inspired by the classic shoot-em-up game Ikaruga, which I played a lot on the Nintendo GameCube when I was younger. 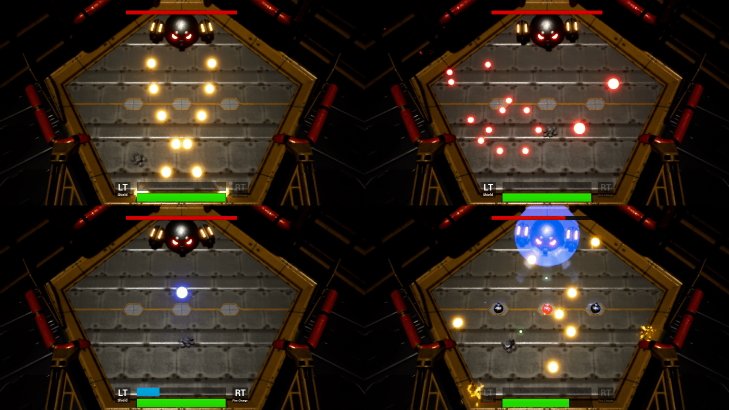 The boss has three main attacks:

There is also a Shield Generator Phase, where the boss spawns three shield generators.

Until all three are destroyed, the boss is invulnerable and will be frantically shooting yellow shots in random directions. The Shield Generator Phase happens twice during the fight.

I focused on creating a good game feel with clear and "juicy" feedback to the player, such as: 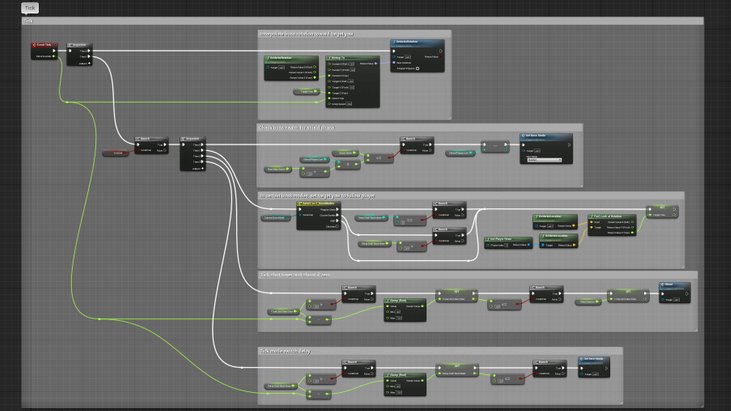 This project was created using Unreal Engine 4 with the use of some free asset packs for models and particle effects, and scripted entirely with Blueprints. Here's an example of how the Blueprints look.

As you can see I value clear structure and well commented code - something I learned the value of through all my years of working as a programmer - which both simplifies my own workflow and also makes it much easier for someone else to read, understand, and potentially take over and continue on my work.

The Challenge of the OP Shield

The biggest challenge of the game design was to balance the shield mechanic so that it didn't become overpowered, and that the player would just keep the shield active at all times. To make the shield more costly and risky to use, and to incentivize more strategic use of the shield...

The boss has three main attacks, which are clearly color-coded so as to be easily distinguishable.

The first is a double-barrel, rapid-fire, sweeping volley of fast-moving yellow shots, aimed so that the sweeps are centered on the player's current position.

This attack alternates between sweeping from the outside and inwards, and from the inside and outwards.

The second is a volley of four red slow-moving Cluster Bombs which detonate mid-flight, each splitting up into six smaller red shots which spread out in all directions.

These smaller shots are also slow-moving, but will each bounce once on the surrounding walls, covering the arena in a chaos of small bullets.

A blue homing EMP bomb which explodes after a set time (so as not to follow the player indefinitely). If hit by the EMP or caught in its explosion, the player will become stunned for a moment, unable to shoot, move or use the shield, and any shield charge will be depleted. If the player is moving when hit by the EMP, they will keep moving slowly, unable to steer.

The boss will randomly switch between these three attacks, with two limitations:

This forces the player to keep moving to avoid the EMP instead of standing still in a safe corner while the arena is full of cluster fragments, and this also avoids the potentially unfair situation of the arena being full to the brim with both red and yellow shots at the same time.

When the boss has lost a third of its health, three shield generators will spawn out of the floor and the boss will become shielded and invincible until all three generators are destroyed.

During this phase the boss will rapidly and endlessly fire yellow shots in random directions, forcing the player to always keep moving.

After the generators are destroyed the boss will return to its three main attacks, and when the boss has lost two thirds of its health, this shield phase will trigger once again with three new shield generators.

The Only Way To Heal

When each shield generator is destroyed, it will leave a single small health pack which the player can pick up to restore a health amount corresponding to a single bullet hit.

This gives the player a limited ability to restore some health only at certain points of the boss encounter, creating tension and anticipation as well as promoting careful and strategic play.

There is no ramping up of difficulty during the boss' phases, meaning the challenge is the same at the beginning and near the end. A few ideas for how the gameplay could get more challenging after each Shield Generator phase:

The player's shield can currently be slightly exploited, since the shield can remain active during the overload phase, with no limit on the number of absorbed shots in the meantime, however forcing the shield to deactivate when full could possibly be deadly to the point of being unfair.

The charge shot could be more impactful and satisfying to use, e.g. by clearing away nearby enemy shots when fired, and having more particle trails for the shot itself.